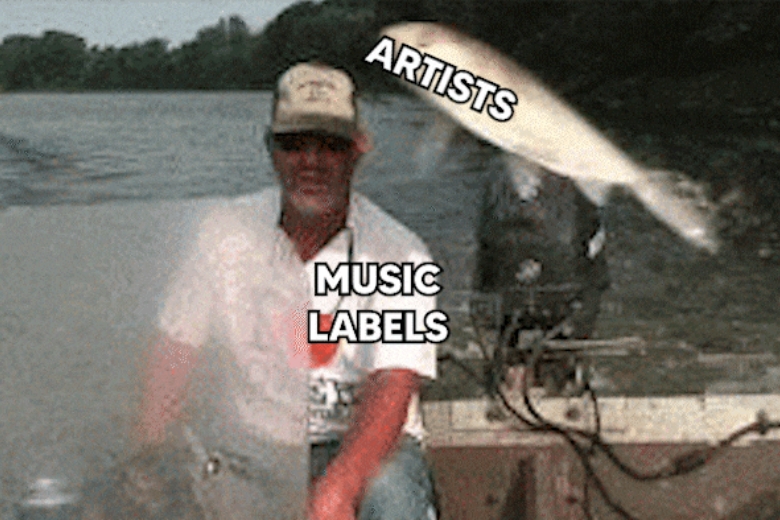 They Should Be Scared

SEP 30
I'll say it one more time and won't repeated again... gasoline-scented candles should be a must. It's the last day of September fam, hope you had a great month. Things are happening, so let's dive in.

🎵 They should be scared
Months of beef between streaming vs music labels, but finally Warner Music Group and Twitch announced a new partnership. I read the article, but let me say something first real quick... Why are most partnerships' articles so damn boring?

After reading the first paragraph I felt like going to a spiritual retreat or some shit. Just bullet point what matters, link to some assets and say something human. The decorated bullshit doesn’t work anymore. I don’t feel excited about partnerships when I read them like that.

Anyways, the article says nothing important. They pretty much allowed their artists to use their music on stream. I mean, the people who stream for a living will still have to delete all their past streams and keep using royalty free background music.

At the Same Time

You’re Here 📍
Streaming Platforms: all current deals ain’t really helping streamers. This is just a move from daddy labels to let their favourite famous kids play music on stream so they don’t bother anymore about controlling them too much.

Difference between Roblox and Fortnite: their approach to music is similar, with the difference that Roblox is fully invested in the metaverse, digital currency and NFTs, so their content and experience go around those lines. Fortnite on the other hand doesn’t trust the crypto and NFTs space yet because of the huge wave of scams, which is fair, so they stick to the collab + in-game content strategy experience.

Something Out There
I think this situation opens a gigantic door for teams, startups and studios to create their own music. Riot Games and FaZe Clan are doing it. I can smell an independent musical movement growing in streaming. Then add this to startups creating music on the blockchain and artists dying to be released from shady contracts, and you get a formula that music labels should be scared off.

📽️ Video of the Week
Our boy Mike from Dexerto went on a journey with OpTic HECZ, and the result was an entertaining short documentary. It just made me wanna have some drinks with them. Fun people.


🕹️ Netflix Ain’t Sleeping
People from Poland, Italy and Spain can already try Netflix Mobile Gaming on Android. This is super early but for now we know that there won’t be ads or in-app purchases and all games will be included with your Netflix membership.

📖 Read of the Week
Insert Coin to Play: The Early History of Arcade Games, by Jen North.


🧵 Thread of the Week
Why Web 3 matters, by Chris Dixon.


⚔️ A New MMO In Town
New World is an Amazon game and is hot. It has some server and queue time problems, which people are pissed about since this is the one thing Amazon should be good at. Despite that, this week New World had 900K+ viewers on stream and almost 600K concurrent players. Here you have the gameplay impressions.


🧧 Nintendo Direct
Ok, things happened. The full video is here, or the Twitter thread here, but you won’t click that shit so let me give you a lil summary:

And last but not least, the voice actors for the Mario Movie were announced and I’m fucking speechless, but the internet is not lol.


🧰 Craft of the Week
Atheria: 250+ hs of solo building in Minecraft, via Reddit.

The New NBA?
NBA 2K League continued its slow international expansion on Sep 29 by announcing DUX Gaming as its 24th team. Representing Latin America — Mexico, specifically — it’s reported that the organization will have to fork out $25M in fees to join the league. $25M! The org is owned by Real Betis footballer Borja Iglesia and Real Madrid goalkeeper T. Courtois.

That’s the price of a slot in the LEC (if you want to buy an existing team’s place), Call of Duty League, or Overwatch League. Oh and it’s undoubtedly overpriced too, unless you’re extremely bullish on some miraculous growth spurt being in the cards of the league. The finals for the NBA 2K League last year was watched by a peak viewership of 48,076 people, a number that some streamers get on their own by chatting to a webcam in their underwear. Some people believe the CDL or OWL were the scams of the century… well, ladies and gentlemen, we may have a new candidate for that award.