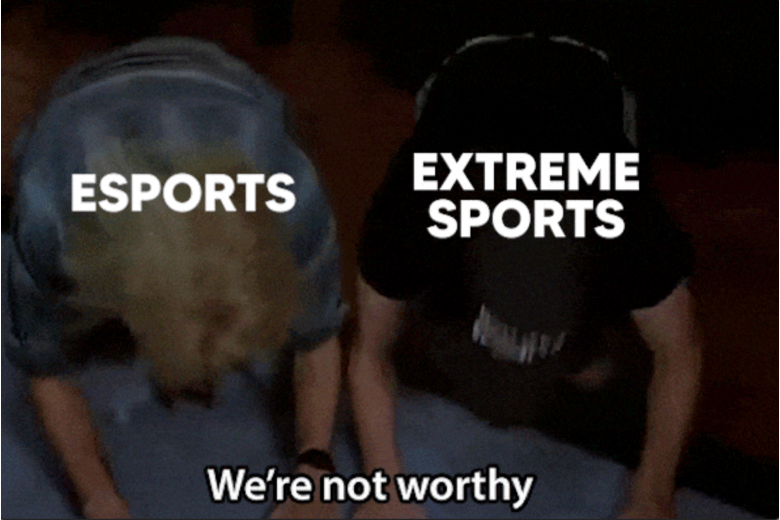 JULY 22
Hello fam. Heavy topics for this one not gonna lie, let’s dive.

An esports tournament making an appearance on TV, or an athlete talking about video games during an interview were the“we made it”... two years ago.

Why? Because of this:

‍
Back in 1982, people were already throwing gaming into the fad drawer. Even though these articles aged like an open carton of milk sitting on the counter for days, it generated a strong PTSD for gamers to crave inclusion.

We’re on our knees for acceptance and it's embarrassing.

It’s important to differentiate the core gamer from the pro gamer though.

When gaming hits traditional media the core gamer thinks it’s cringe, which to be fair, most times it is. The pro gamer understands that having an audience is the most important element in the equation.

People who work in esports and gaming also join this category. We want world acceptance mostly because of our experiences explaining what do we do for a living to friends and family.

But the reality is that we’ve been looking at this all wrong.

The Olympics Narrative Must Stop

Look, it took years for the Olympics to include skateboarding, and this year, most commentators were looking at it and said “is that even a real sport?”. Imagine their reaction to gaming.

Why do we give a fuck about being there? What do we truly get out of it?

Here's the problem. Gaming as a whole doesn’t need the Olympics at all, it would actually be a nice to have. But esports though, we all know it isn’t the most profitable biz at the moment, and I understand that people would look at the Olympics and approach it to get more eyes or brands.

However, we’re at the point where we lose more than we win by hanging out with the peeps at the Olympics, and this is why:

It looks like you’re forgetting that esports is the equivalent of sports, not a single sport.

The first Olympic games were held in 1896. Extreme sports like skateboarding, surfing, mountain biking and more, came along later. I can already imagine the classy, elegant Olympic categories treating extreme sports like bastard relatives, with literal disgust in their eyes. This is giving me some Jon Snow vibes.

In 1995, extreme sports stopped giving a fuck about fitting in, created the X Games, and the rest is history. Today, 25+ years later, the Olympics’ viewership is hurting, reflected in them finally trying to incorporate extreme sports in exchange for stats.

Esports is in the same spot that extreme sports were before, with the difference that esports already has a strong audience, dope sponsors and Twitch as a platform to distribute competition like never before.

It will be a long process because we do have blockers:

Maybe I’m a naive idealist, but I see a world where top heads in esports pull this off.

And by the way, once proper VR hits esports… it’s over, but that's a beer talk for another time.

🧰 Craft of the Week
A Nintendo Gaming Cabinet, via Reddit.


🙅‍♀️ Trouble in the Ethics Biz
Power exposure flowing towards gaming also comes with stupid degenerateswho can’t control themselves and abuse like its standard behavior. It first came to light with Riot Games and now Activision Blizzard.

Here’s the truth: A few years back, when the gaming industry started to receive huge investments, clout and power, the people who were part of the foundation suddenly went from being marginalized because of looks, social capabilities or being a gamer, to now having revenge.

Don’t even start with “you are exaggerating, that shit ain’t true”. I’ve seen it with my own eyes. Obviously this isn’t everybody, most people are normal, but a good amount have been fucking up for years. I mean 2,500+ examples in one company is not just a few bad apples.

Don’t be a sheep, confront other men when you see it.


📖 Read of the Week
What is the difference between Western and Eastern RPGs, by Victor M. Costa.
The Nintendo GameCube, by Ben Shelley.


👘 Cosplay of the Week
Arkham Knight, by jmweissman.


👟 AR Fashion
Vogue interviewed RTFKT Studios’ co-founder, Benoit, to talk about AR fashion. Very interesting stuff to be honest. But most importantly, here is what he said on LinkedIn:

“The interesting thing about AR fashion is that while it's in its early days, the technology is making big moves daily, and that the big fashion brands solely use it to try-on purpose for now, feeding their core business of selling physical goods. At RTFKT we've been on the tech since day one, as we believe the day Apple finally comes out with AR glasses that look dope and work, the whole fashion industry and how we flex will shift to Virtual first”.

🌐 Metaverse Bites
Mark Zuckerberg’s vision for Facebook and the Metaverse.

What the fuck is GameSquare?
We’re used to companies flooding esports looking to tap into the promised-though-elusive pot of gold that is apparently at the end of the competitive gaming rainbow. GameSquare Esports is the latest entry to this trend. Here’s how they “increased” their valuation by over 9.2x in under nine months.

If you’re looking to make a statement about wanting to be a big part of the esports industry, this is definitely one way to do it. Can GameSquare make shit happen without buying out those than can, however?

This person naming Link “I farted”, made my month.