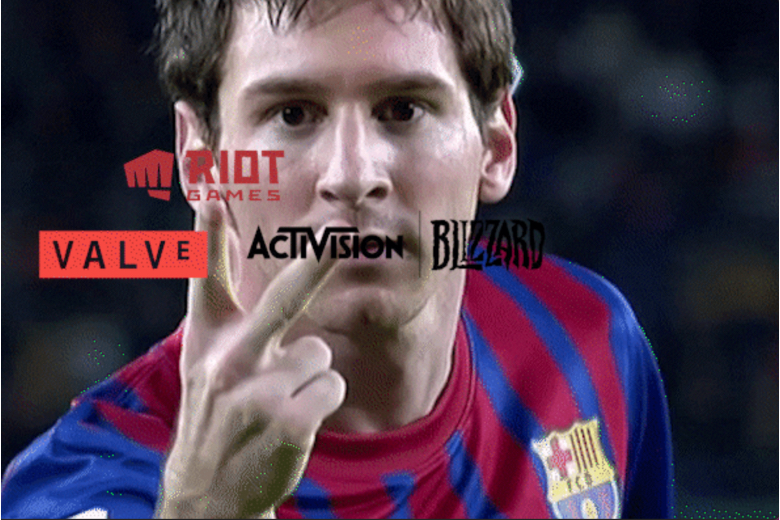 It can't get any better than this. Oh wait...

AUG 12
Hello everyone. If you're having a difficult week, I send you a virtual hug. Grab your drink, we're approaching the weekend.

It can't get any better than this. Oh wait...

By being Argentinean, you know by now that I love Leo Messi like a brother, even thought he doesn't know my face. It's been a good month so far.

We learned a lot about entertainment this week thanks to Messi and PSG. Let’s try to connect the dots between this event and the gaming/streaming world.Some spicy shit went down, grab your drink.


Triple T: Talent Takes Time
A single player can quite literally change the economy of a city, a club, a business, a family. A purchase that sounds astronomical, most times is recovered in two days of jersey sales; without even adding new sponsors, collabs and broadcast deals to the mix yet.

Can’t compare esports with sports, they are different. If anything, we should merge them. But we can compare how talent is built.

It’s basic but important. Competition is fundamental, it gathers people who believe they are good at something in one place, showcasing the current talent situation of a region. Once people see who is doing better, motivation comes next, and the scene develops.

Obviously you’re thinking — “are you comparing Messi with an esports player, you dumb fuck?”. Maybe, because indirectly, we all are.

Investors placed a lot of money in esports, and team owners were left with these questions:
- Do I put the money towards a strong team now and satisfy my investor short term?
- Do I put this money to educate the city about esports and collaborate long term?
- Wait, can I get fired short term? Are other esports teams joining the long term cause?
- What if the game publisher doesn't know how to treat women in their workplace and all of the sudden the game doesn’t exist anymore?


So, what now?
We think and act as sports executives, in an esports world. First mistake.

It’s understandable though. It’s risky to believe long term when the competition is owned by a company and talent isn’t being culturally nurtured.

The difficult part is that nurturing an industry not only depends on the people who are interested but also on external factors like governments, traditional media, and more.

We need to figure out the publisher-esports teams relationship first before anything else. If we truly want to build esports, publishers will have to give some control away for long term reassurance.


Double T: Traditional Tears
Anecdote time.
Ibai, the Spanish streamer I told you about last week, was mocked and criticized on Argentinean sports TV (traditional media making fun of streamers is common currency in every country by the way).

The TV channel then brought Ibai live and kept making fun of him with shit like “you don’t move from your computer”, “who are you?”, “you play games with Aguero? Good luck trying to interview Messi”.

That was two months ago.

Last weekend, the night before Messi announced he was out of FC Barcelona, he organized a small farewell dinner at his house with a small group of people: team captains, family and two fucking streamers, Coscu and Ibai.

Ibai talked (in Spanish) about the whole experience on stream. Which was insanely funny, truly one of the best pieces of content I watched this year.

But wait, it doesn’t finish there.

Yesterday, for Leo Messi's presentation day, guess who got invited to interview him? Yep, the streaming world was represented in France by Ibai.

While traditional media was interviewing random ass people outside the stadium buying Messi shirts, Ibai was inside doing what ever the fuck he wanted.

When he talk to Messi, the stream reached 300K viewers. He did it with a phone.

The Change
The transition from TV to Twitch isn't the main point. It took Ibai to have dinner at Messi’s home for news channels to be like “oh shit, we actually need to respect streamers”.

The true change is that traditional media now understands that technology isn't the only thing they need to adapt to, but also the fact that streamers can go around them and not through them.

PSG uploaded on Twitter some clips from Ibai’s coverage on the PSG Spanish account which was dead for years, and now it has videos with millions of views.

If you think it can’t get any better than this for Twitch, this is just the beginning. It's crazy because how many times have we ask "do you remember how it all started?", I really believe this moment right here had peek importance for the future.


🙄 FOMO Peeps
Just in case you missed it on purpose, but you can’t control yourself, here’s the full Fortnite x Ariana Grande event. Main thing to have in mind here is that Epic Games has been doing one-off experiences like the Travis Scott or Marshmello concerts. However, with this one, we start to see their strategy towards storytelling, narrative and interconnected events.


🧰 Craft of the Week
Framed PS controller, by psynses.


🌐 NFTs Showcase
Fanatics got tired of not having competition in sports apparel (official online retailer for all US sports leagues, +150 universities, and more), so they launched Candy Digital, its own NFT company, to see if someone can bother them at least digitally.


💄 Gaming x Beauty
In 2021, 45% of gamers identified as female. Most brands are heavily aiming towards man, but the opportunities are there. Streaming and beauty partnerships make sense from anywhere you look at it. Esports and beauty, not so sure. Would be interesting to know what % of girls are interested in esports from that 45%.


🕰️ Retro Vibes
The latest game system to get a mini retro remake: The Amiga.

(It’s Over)watch League?
Depending on the report you read, the Overwatch League is about to go on a hiatus for either a short period of time or a whole ass year. Remember, the league has 20 teams that are all investing at least $25M to be a part of. I can’t help but question how the upcoming break — whether it’s a month or a year — is going to be sustainable for many of the franchises.

The league has also been subject to dwindling interest, both from a viewership standpoint and from franchise owners who are exploring sales (trust me on this one). With plenty of players already retiring from the league or moving on to the next shiny game — VALORANT, of course — the Overwatch esports landscape is likely to look vastly different from 2022 onwards.

Me at a cosplay party: