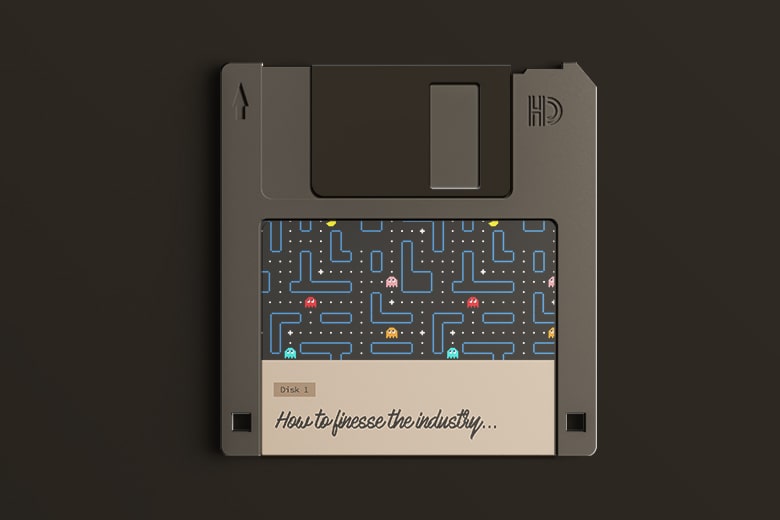 There're a lot of similarities between the gaming industry in the '80sand today. It's important to learn from the past to understand the shit that happens right now.

The first episode is 50 min, and I know you're a busy person. So I thought, let's hook you up with a curated and unfiltered Weekly version of it. If you still want to watch the series, forget about this post. If not, get ready, we're about to get dirty.
‍

This was Japan's first arcade blockbuster. It became so famous that most game centers were known as "invader houses".

He got inspired by Atari's Breakout Game and its feeling of wanting to play it again and again. You probably remember this game as destroying bricks with a little moving bar and a bouncing ball.

Instead of bricks, he was going to use tanks, ships and planes. However, the talks on Star Wars' release in the United States influenced Tomohiro to design towards the space theme.

This guy casually shows a notebook with the first sketches. Just like J.K Rowling's story on Harry Potter cafe napkins notes, it's really hard to believe that the gaming foundation came from a sketch of a fucking space octopus.

Space Invaders caught the attention of the American gaming giant Atari. When the game came out, it instantly exploded because it was one of the first ones to have strategy. It was hard to be good at it, only the people who understood the patterns reached high scores.

The concept of having a high score was the new reason of "I want to play again and again". This feeling was called Flow. Athletes, musicians and now gamers had it. Flow is a fun activity with the right amount of challenges, a clear set of rules with concrete goals and outcomes, an effortless yet intense practice that pushes your skills to the limit. In other words, you're in the zone.

The United States instantly recognized profit opportunities, resulting in more than 30 companies designing different arcade games. In no time every American penny was being sucked by arcade machines.

‍There was a problem with the arcade games' revenue system.

People had the opportunity to play for long periods of time, which quickly made them good at the game but tired of it at the same time. The arcade machines' monetization curve started to look like granny's tits.

They stepped in with their 200 IQ and finessed the industry by creating the concept that we know today as "patch notes". The duo bought some copies of the game Missile Command, programmed update kits and attached them to the arcade's main logic board.

The kits made changes possible. Now the game was able to have different attack modes, speed, colors, sounds and much more.

It helped in two ways:

But how much is "a lot of money" though? Quarter-million dollars in a couple months. Yep, that's why they were college dropouts.

The next step was to do the same thing with the best selling game in the world.

‍The gaming centers were dirty as fuck, dark and only men were allowed to play. Somebody had to change that, but the only way to do it was with a new hit.

Toru Iwatani was in the process of developing a game when he ordered a pizza, took a slide out of the left-slide and instantly imagined a yellow circled face, later called Pac-Man.

They thought it was going to be massive in Japan but weak in the west. Little did they know, every single women was playing Pac-Man in the US; and when something works well in the States you know what's next... Pac-Man songs, merch, sponsors, movies and shows.

Coming back to our MIT lads. They saw Pac-Man as a repetitive and easy game to master: perfect for their enhancement kits.

‍They called Mike Horowitz to help them out with programming. He instantly found a huge issue inside a great game. Pac-Man's paths were the same every time. If people memorized the patterns, the game was going to be easy to beat, leading into revenue thirst once again.

Therefore, he literally reverse-engineered Pac-Man to introduce new mazes (maps) and making the ghosts to go in random directions.

It wasn't all rainbows and fluffy bunnies though. Around that time, Atari came through with a nasty $15 million lawsuit against their Missile Command kits.

Nolan Bushnell — considered the godfather of video games. In the '70s, during his late 20s, he created the home of video games consoles and computers, Atari. I'm in my late 20s and I barely know how to wipe my ass with toilet paper.

It pretty much was the biggest consumer electronics company on the planet vs Doug, Mike and Steve.

While Mike kept working on Pac-Man, the other two went to court vs Atari. The main points? Copywriting, trademark and misrepresentation of origin.

They defended themselves by changing the code that Atari was suing them for. The gaming giant had a lot to lose. If this was visible, now anybody could use their code.

The result? Settlement, on two conditions:

The game wasn't an Atari creation, they needed to find a way around it. Pac-Man's US manufacturer was Midway Manufacturing. These 21 year old kids called Midway's President and said "Nobody knows about this yet. We won in court against Atari, give us permission to use your game".

They agreed, signed a deal and called their game Ms. Pac-Man.

Jerry Lawson was an electronic engineer. On the side, he created arcade games. Jerry got hired to build the technology for the next challenge in gaming: a console with interchangeable games.

He led the team that made it happened by giving birth to Channel F. Atari saw it, recreated it and instantly killed the competition. Maybe the reason why most people never heard of Channel F before.

Howard Scott Warshaw worked for Atari. He had a number of multi-million dollar games under his belt. Back then, creating a title like that would take from 6 to 8 months.

People from the ET movie called him and said "we need a game in 5 weeks and in 36 hours you'll jump on a plane to meet with Steven Spielberg to show him the design."

He pitched the game to Spielberg, who replied with "can you do something more like Pac-Man?". Howard thought — nah, you're crazy — but said "I think my version makes more sense to make tribute to your awesome movie."

Warshaw finished the game in time, Spielberg approved it and made 5 million copies for retail. Lovely Christmas Eve arrived; the stores were filled and ready to sell.

Every single person on earth hated it.

Receiving Santa's coal was better than playing that game. ET was a complete flop. It was considered the worst piece of entertainment ever created.

If you add to the mix the fact that the home-made version of Pac-Man was also a failure + a wave of bad games created by publishers with the philosophy of quantity over quality. What you get is the beginning of the end for Atari and the gaming industry.

If Pac-Man, ET and Raiders of the Lost Ark weren't selling... what will?